Winter Blues And Some Good News 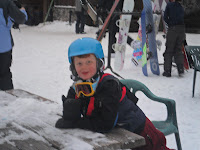 January is a tough month. It feels like 31 days of a nasty holiday hangover. Each day I promise to write something, anything and each day I end up curled on the heater vent reading magazines or trying to engage in some sort of acceptable meditation or come up with some excuse for lying perfectly still while the hot forced air dries out my skin.

I suppose I am like this every winter. I hear it in my mother’s voice as we commiserate over the phone. Where she is it’s below zero, the sun’s muscle powerless in the frigid air and where I am is socked in with fog and rain, the gutters spill like waterfalls onto the soaked lawn.

We did travel in search of sun -- to Sun Valley, Idaho, the sky an unreal crayola blue against the crisp white Sawtooth range and the sun blaring over the peaks -- eerily similar to a child’s drawing proudly hung up on a refrigerator door.

Sean is becoming quite a skier. My husband, with the patience of Job, taught him to ski four years ago and taught him well. It did not come easily. Any mere mortal would have thrown in the towel on the first day. I can still clearly remember one incident (of many) when Sean took a terrible spill and screamed and tantrumed, hit and scratched my husband ran in circles and rolled in the snow. My older son and I watched the whole ugly scene unfold from above in a chairlift.

“Sean!” my oldest yelled down to the bundled up boy moving as if his body was exploding in flames, “You like the chairlift?”

Sean became still for a moment, then his head darted about to find the voice and then he spotted us up above, his cheeks still visibly red from his tantrum and from burying his face into the icy snow. The idea of being lifted through the new night sky on a chairlift, his body sifting through starlight, was the redirection he needed and he trudged over to my husband demanding another ride, getting back into his bindings and pushing his hands into his mittens. The neurological storm had cooled. He was ready to go again and my husband, seemingly unaffected by it all, was ready to take him for another run.

You can anticipate at least two or three horrible meltdowns with Sean each day of skiing. A wipe-out will always precipitate one. If somebody skis to close to him is another. And then there are the unexplained, the ones that come out of nowhere, the meltdowns that usually start with something so illogical (“Why don’t I have a W in my name?” or “Sam didn’t mean to clap?”) that you just have to hold on tight and hope that it lifts as quickly as it has landed.

Sometimes a plate of French fries will distract him. Or hopping into the snow drifts with his heavy ski boots. It’s usually hunger or his body out of sorts, tumbling away from him and making him disregulated. And sometimes, we take turns walking him to the car – his hot tears and screams drawing stares and comments. On the worst days, we call it a day and hope that the skiing will prove to work as some type of exposure therapy.

But I have to say, I am wildly proud of my little guy. And of my husband. He believes in Sean in a way that I don’t know if I can. He could care less what people think of his boy because he knows what a trooper Sean is. He sees a skier in our son -- a thrill seeker. He sees a child that can do anything if only he sets his mind to. In this new year, I want to be more like that -- I want to hope and I want to believe that Sean can do anything he so desires. Why not?
Posted by Katie Donohue Bevins at 10:08 PM 3 comments:

Sean turned ten. I can hardly imagine that he is in the double digits. A decade. Wow.

My husband and I were not looking forward to the milestone. We wanted to keep him nine for another year, give him time to possibly catch up to his age. He is nowhere near a typical ten year old. Not even close to a nine year old. And watching him become a year older can sometimes be a painful reminder of how far behind he is and how much work he needs to make up in order to someday catch up.

In the years past we tried to have birthday parties and find the “one” gift that would truly amaze and transform him. The parties always ended up with Sean being too overwhelmed and the gifts were tossed aside and disregarded. Let’s face it; he was just trying to keep it together in what he perceived as complete chaos, utter mayhem.

So this year we invited good friends over that know Sean. A husband and wife and their two children who Sean counts as two of his “best friends”. She asked what she could get Sean and I told her,

“Nothing really. He doesn’t get the whole present idea and he really doesn’t play with any toy in particular.”

When I asked Sean what he wanted for his birthday he said,

At first, I imagined that reality star woman Kate Gosselin and her brood of children and thought,

“Well, it’s a sacrifice and she seems like she could be a lot of drama and be totally high maintenance, but maybe I can pull it off. It would be a lot more kids to house, though.”

“Or maybe a guinea pig.”

He followed with, and the image of the “always reinventing herself” Kate Gosselin vanished into a picture of a fluffy baby bird and a rolly polly giant hamster. I don’t know which image seemed more realistic. Sean is not very good with the cat and dog. We had a fish that Sean took out of the bowl in order to “take for a walk”. Luckily I got the fish back into the water but that one could have ended badly.

What we decided to do was have pizza and cake and I shopped at the Plaid Pantry for the birthday loot. My husband reminded me of what Sean really wanted – Root beer, Ritz crackers, a Pop Tart and Reese’s Peanut Butter Cups – essentially a hillbilly survivor kit. These items have had to be ruled out for Sean – to him these over-processed, dyed-added, corn syrupy delights are like crack to a crack head. He can’t stop at one Ritz. Nor could he ever just have a “sip” of root beer. We don’t even keep ketchup in the house because Sean will guzzle it down like water. My older son wanted to see if we could do a successful intervention on the ketchup alone…

Weirder things have come out of our mouths.

And my friend ended up buying Sean a couple of books and two Butterfingers. He threw the books aside with one hand and tried to peel off the wrapper and bite into the candy bar with the other. He followed it by a guzzle of root beer. We put the candy in the freezer and told him he could have a Pop Tart (his form of black tar heroin) in the morning. We hid the crackers and emptied the rest of the root beer down the drain after he made a pretty good dent and had forgotten about it. Luckily the” out of sight out of mind” trick works for Sean.

It was the first birthday in recent years that I didn’t watch Sean sit in a crowd of kids, tear into a set of “Read Along Books” and a Soccer ball and watch them get hopelessly flung to the side while his eyes were steeped in terror and worry. I didn’t pin my hopes and dreams on this birthday – it had been ten years since I went into the hospital – the snow falling from the sky like loose feathers from a tear in a pillow case and the streets growing thick with ice. Ten years since he was placed in my arms and a silent promise was made to just simply take care of him, to love him, no matter what.
Posted by Katie Donohue Bevins at 7:34 AM 4 comments: