The Christmas season came and went -- a blur really. I had hoped to slow it all down -- to relish in the simple, spontaneous moments but got caught up in the whirlwind. December started out quickly with a trip my husband had planned to Shanghai, A short trip, really -- only seven days -- there and back in no time. No time to brush up on his Mandarin or much sight seeing -- just business. He has been to China many times. He first went to China during a college overseas program. After China he moved to Taiwan to teach English for a year. Since I have known him (more than eighteen years) he has been back and forth many times. At one point, before autism entered our lives, he had hoped to live there with the boys and me for a summer at least, maybe longer. But like many plans that at one point seemed so reasonable and logistical, it soon became unlikely. But who knows for sure.
We headed out to Chicago for the holidays to catch up with family. Ten days that came and went like wind -- fast and furious and never enough time to see all those who we want to see. It snowed, my parents’ front lawn looking like sheet cake -- smooth and white glinted with sparkles. The boys joined their cousins for sledding and snowball fights, Sean running and laughing his cheeks burning red with chill, his boots wet with melting snow. The days peeled by like Christmas wrapping paper torn from boxes and toys -- the anticipation building and peaking to an ear-splitting crescendo, leaving my mind ringing with echoes days after.
And today, back in Portland, I watch the snow lingering in the dusk -- like feathers from a torn pillow, floating carelessly. The flakes tangling in the empty branches of the elms and maples, like diamond bangles on bony wrists, like silver spider webs in the giant firs, like melting starlight spilling on the ground, the swingset, the lattice in the garden. For an evening, my backyard looks like a postcard -- a winter wonderland and I catch my breath every time I look out the big picture window.
It slows me down, reminds me to take a moment to drink it all in, the reflection of the Christmas lights twinkling off the glass, the sounds of the sleds being pulled into the garage, my childrens’ excited breathless laughter and the wet puddles at the door. This is the gift I have wanted most -- this present with its dreamy bow on top, hugged in ribbons -- a snowy memory swimming in tissue paper.
Tomorrow it will probably all be gone -- the marine layer working it’s way in, the colder winds shrugging off to the east and the snow warming to rain, washing it all away like a shaken Etch-a-Sketch. And tonight will seem only a dream, the branches losing their coats of silver and crystal melting to a swirl, the miracle of it all so fleeting.
Posted by Katie Donohue Bevins at 9:50 PM 5 comments: 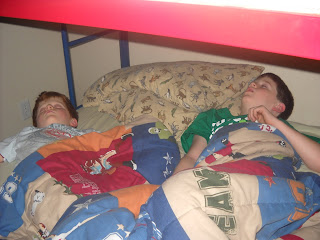 It was going to be a long afternoon. Sean wanted to play basketball outside which is fine -- the weather, albeit cold, was unusually sunny. He ran to put his high tops on and grab a ball and he headed out to our neighbor’s basketball hoop. The first try, arms between his leg, the old granny-style toss, proved to be unsuccessful, the ball floating through air, touching no net, not even rim or backboard and sailing straight down in front of him. He started muttering. Second attempt was worse. It actually went over the backboard and landed in the neighbor’s June berry bush. His hands began slapping against his legs and his voice got angrier,
“Don’t watch me, Mommy. Go inside!”

“Sean, you are not going to make every basket. You have to be a big boy. No yelling.”
“ No!” he yelled, his voice edged in hysteria, “No! You go inside!”
Sean’s big brother appeared at the door, “Why is he mad?” he asked.
I walked toward him and explained that he was frustrated that he wasn’t making any baskets.
“I’ll help him,” he said and went down to the street. Sean was still angry as his brother tried to steady him, telling him to calm down and aim for the net.
I watched from the porch as each shot missed the intended net and Sean became more out of control.
“That’s enough,” I said walking to Sean and grabbing his arms and shoulders. He twisted and screamed, his body stiff as I tried to carry him into the house.
“It’s okay, Mom,” his brother said. “He’ll be fine when he makes the basket. I know. He does this.”
I dragged Sean into the house, his voice screeching, saying over and over,
“I want a new Mommy!”
All I could think was, “Good luck with that. You're stuck with the one you've got.”
Charlie came back in the house, bent down to Sean and said, “Come on, Sean. You can do this.”
I reminded Sean that he needed to be a big boy and no screaming.
“But I am frustrated,” he said, his face tear stained, even his ears were flushed red.
“I know, Sean, but you need to find a better way to deal with that. Screaming and carrying on like that isn’t going to make it any easier.”
“You stay inside, Mommy. And don‘t watch me.” his voice starting to calm, his order declared.
His brother went out with him and after the third try Sean made it. I watched secretly through the blinds and although my view of the basket was obstructed by the giant red cedar, I could see Sean’s body relax, his fists unfurl and heard no yelling -- every indication that he reached his goal.
The two brothers came back into the house, with the older brother saying,
“Good job, Sean. That was awesome. I can hardly make that shot either.” The last sentence he spoke was untrue -- he could make that shot blindfolded.
Sean was still breathless and anxious. He had built up so much anxiety over making the basket that it took him the rest of the afternoon to calm down and to lose some of his edginess.
By evening he was better, although he was tired and cranky.
“Listen to my music with me, Mommy,” he asked, toothpaste on his chin and his pajamas inside-out. I sat down on his bed while the music floated out of the CD player -- the flute and violin softening the night.

His older brother came in a few minutes later and said, “I will stay with him, Mom.”
“No, that's okay. Thank you, though." I whispered.
Then Sean piped up, “You stay with me, C?”
“Sure, Sean,” He said.
I tucked them in and said good nights and went to my room which is directly across from Sean’s room. I listened to them talk. They do not talk like brothers who are only 19 months apart. Sean talks about things that matter to him and only him,

“Who do you want to be in Monsters vs. Aliens? “
His brother plays along, “Can I be the Missing Link?”
Sean thinks it over and says, “Okay. You are the Missing Link. Is Shrek Pixar or Dreamworks?”
And then, like he always does when he goes through his litany of questions answers his own question, “Dreamworks. Yes, it is. Dreamworks.”
I am about to leave my room when I hear his older brother say kindly,
"You are a really good basketball player, Sean. Maybe someday we can play basketball together. What do you think?”
Sean doesn’t answer. There is just silence for a moment and then Sean says,
“Yellow is my favorite color.”
More silence. “I like blue. Good night, Sean,” his brother says softly.
I really wanted to hear, and for the briefest moment thought I might, Sean answer,
“Yes, I do want to play basketball. That would be fun.”
But my boys don’t have conversations like that. My older child is incredibly patient, but I couldn’t help think that sometimes he must long for the brother who can shoot hoops and talk football and tell jokes with and share stories.

My mother would say, “You never miss what you never had.”
Maybe that’s true. This is the only brother he knows -- a little brother that he has always protected and loved. They are not rivals. They hardly fight. They don’t have a lot in common. But at the end of the day, they are brothers -- and I don’t think either would be the boy he is without the other. They make each other better.
Posted by Katie Donohue Bevins at 10:32 PM 6 comments: